How Blogging Started – An Origin Story 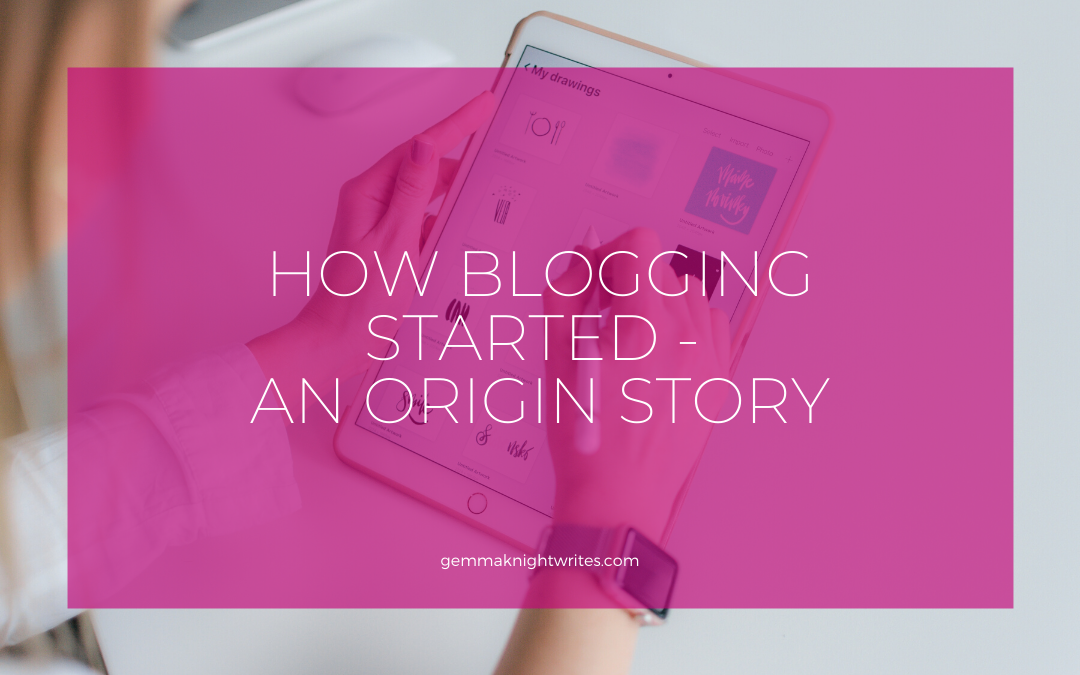 They are all over the internet.

There are so many pieces of content out there that you could not possibly ever read them all in your lifetime.

Blogs have come to be recognised as an essential part of any successful branding and marketing strategy. Once purely the domain of hardcore internet users, you will now find them on most business websites covering every topic imaginable.

For many, they provide invaluable information on everything from travel and fashion to health and parenting.

But have you ever thought about where they came from?

For a resource that has taken the internet by storm, blogs are relatively new on the scene. So how did they start and why did they become so dominant?

This question fascinated me and I wanted to know the answer.

So, let’s learn all about the roots of blogging together.

What is the origin story of blogging?

No one got bitten by a radioactive spider (that we know of), and no one was forced into a life of vigilantism as a result of a tragic backstory.

But the origin story of the blog is still a good story!

We have Justin Hall to thank for the very first blog in 1994, although it wasn’t known by this term at the time. He just referred to it as his personal homepage. Hall enjoyed browsing the internet and discovering new and interesting things – so much so that he decided to “share” them with others.

He did this by publishing links, along with photos and personal commentary.

Originally, blogs were referred to as weblogs. This was a term coined by John Barger in 1997, writer of a blog known as “Robot Wisdom”. They were called this as their writers were literally logging what they found on the web.

In 1999, Peter Merholz shortened the term to “blog,” and clearly, the name stuck.

These early blogs were all done by coding. There was nothing as simple as WordPress, Wix or Shopify then! They had to be created by tech-savvy individuals who could code and build their own websites.

That all changed when several blogging platforms were launched, including Xanga, LiveJournal, and Blogger.

Although these sites were all birthed for different reasons, they eventually helped make blogging a more mainstream, accessible hobby for everyone.

Still, these early blogs were rather uniform. They all looked the same, and the blogging platforms didn’t allow for much personalisation…

Until Moveable Type was released in 2001. This site enabled people to have more control over the look and style of their blogs. WordPress, arguably one of the world’s most popular blogging platforms, came not long after.

Initially, blogging was mostly a personal endeavour. They were a kind of online diary and outlet for creative types to connect with others.

But in the early 2000s, political blogs started to appear, along with technical blogs offering tutorials and guides to a range of subjects.

Many of these are still around today, with huge followings. Some of the most successful are known as “meta blogs” – which are blogs focused around how to blog!

In 2003, Google launched the AdSense platform. This changed the game for many bloggers, enabling them to monetise their content by placing third-party ads. That’s when a career as a blogger became a feasible option for many.

In March 2005, blogger Garret Graff was granted a press pass for the White House. Obviously, this further legitimised the blogging career path.

Huffington Post launched as a news/blogging site in 2007. By then, blogs were commonplace.

Today, there are more than 440 million blogs on the internet.

Vlogs (video logs) are just as popular as their written counterparts, thanks to platforms such as YouTube. As technology, creativity, and the capabilities of the internet continue to expand by the day, who knows what the future holds for enterprising minds.

But as the grandfather of blogging, Justin Hall, would no doubt tell you, anything is possible!

Blogging has become a fantastic tool for business. Not only does it drive website traffic, boost your SEO and provide a wider story about what you do, but it builds a connection with your readers.

It helps small businesses to play on the same stage as larger companies, carving out there own space in the market.

So, if you want to utilise this fantastic tool in your business, check out my other blogs for more awesome info, or browse my blogging packages so that I can write them for you.